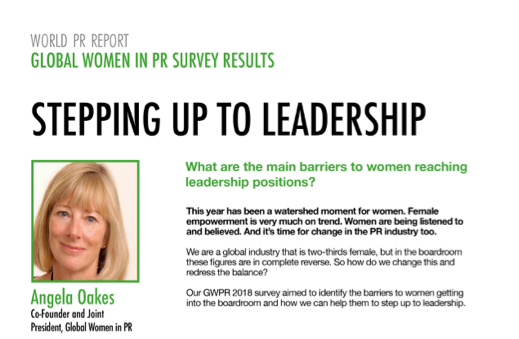 The global PR industry is two-thirds female; but in the boardroom these figures are in complete reverse. So how can we, as an industry, redress the balance?

For our GWPR survey this year we asked global agency leaders what they believed were the barriers to women getting into the boardroom. In addition we asked what organisations could do better to help women #step up to leadership.

Not surprisingly juggling family and work commitments was seen to be the biggest barrier by over half (58%) of respondents. Another significant barrier was believed to be the traditional structure of business favouring men as leaders; highlighted by 45% of respondents.  40% of agency leaders also believed that unconscious bias existed in organisations; yet only 22% offer unconscious bias training to their employees.

Fundamental to addressing the main barrier of family commitments competing with the demands of the workplace would be to have better flexible working policies in place. But we found that although 83% of organisations offered flexible start and finish times; only two-thirds (67%) allowed employees to work from home on a regular basis.

Interestingly, women are not seen to be lacking in the skills and competency needed to be leaders. Only 11% of agency leaders felt that women lacked the required leadership skills.   That said, only 24% of organisation offered leadership training programmes specifically tailored to women.

We need to change business culture, so that it becomes acceptable and the norm for men to take parental leave as well.

Retaining talent remains a major challenge in the PR industry. Our research reveals that agency leaders believe the main benefit of having a gender balanced boardroom is employee satisfaction (55%). Other important benefits highlighted were increased creativity (46%) and employee retention (42%).